You have new quote information.

Please be advised that RSL will be monitoring the quantity of certain products purchased online due to ongoing disruptions in our supply chain. The availability of stock showing in branches outside your area is not guaranteed and must be confirmed prior to ordering. Please contact your local RSL representative if you have any questions or concerns.

The size of the cap tube is fairly critical. Unlike orifices, such as expansion valve seats, capillary tubes depend on their length as well as their diameter to determine their total restriction. The relationship between these two factors is shown in the Length vs. Flow chart. A change in diameter on a percentage basis can change the flow more than an equal change in length. To illustrate, changing the diameter by .005" as between .026" I.D. and .031" I.D. can double the flow. Restriction can also be changed by lengthening or shortening the cap tub. The longer the tube, the slower the flow; the shorter the tube, the faster the flow. The general flow curve graph (right) shows what happens to the flow of refrigerant through a cap tube as the length is changed. This curve is not meant to give specific flows but to simply illustrate what happens with all cap tubes so that the general flow pattern can be understood. 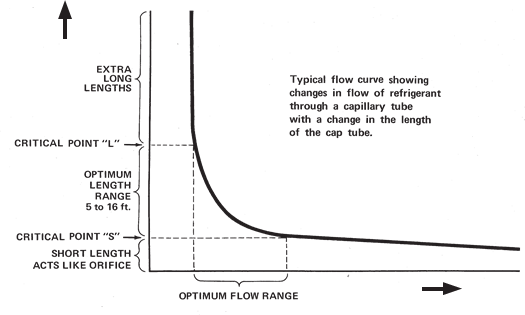 By following the flow curve from left to right it can be seen that for the very longest length the flow is the smallest. Then as the cap tube length is decreased, the flow increases slowly until the critical point "L" is reached. At this point, the flow increases more rapidly with each reduction in length until the critical point "S" is reached.  From this point on, a further decrease in length causes ever-increasing flow. From the study of this typical curve, certain pertinent conclusions can be reached that directly affect the field application of capillary tubes.

On the graph, the section above the critical point "L" is marked as extra long lengths. Attempting to increase restric- tion (i.e. reduce flow) by increasing length into this region is not only uneconomical but frequently hopeless. In ad- dition, tubes in this range may not be responsive enough to changes in head pressures during operation. All in all, tube lengths in this range should be avoided where possible.
Continuing down the graph, the section below critical point "S" should be avoided like the plague. In this range, the tube is so short that even small changes in length will cause very large increases in flow. This is caused by the fact that the length no longer affects the flow and the tube now begins to act more like an orifice than a capillary tube. But, without the other components necessary to control an orifice, such as are present in an expansion valve or high side float, a very short cap tube will give wildly erratic operation under varying ambient and loads.
All of this would be meaningless without some definite way to use this information. Although the critical points will vary depending on the I.D. of the cap tubing being used, a very safe operating rule-of-thumb can be offered.

RULE OF THUMB
Keep the cap tube no shorter than 5' and no longer than 16'.  As in all general rules, there are of course exceptions, but for day to day operation, keeping a cap tub within the 5' to 16'  range will eliminate many problems.

An easy way to avoid these problems is to use the R-Line application charts and R-Line capillary tubing. These charts offer recommendations for almost all cap tube systems from 1/20 HP to 5 HP, plus any air conditioner from small window units to large central systems using multiple cap tubes.

This conversion chart enables the user to translate the recommended length of tube diameter into sizes stocked by J/B. In using the chart it is recommended that conversions be made using factors within the unshaded area. 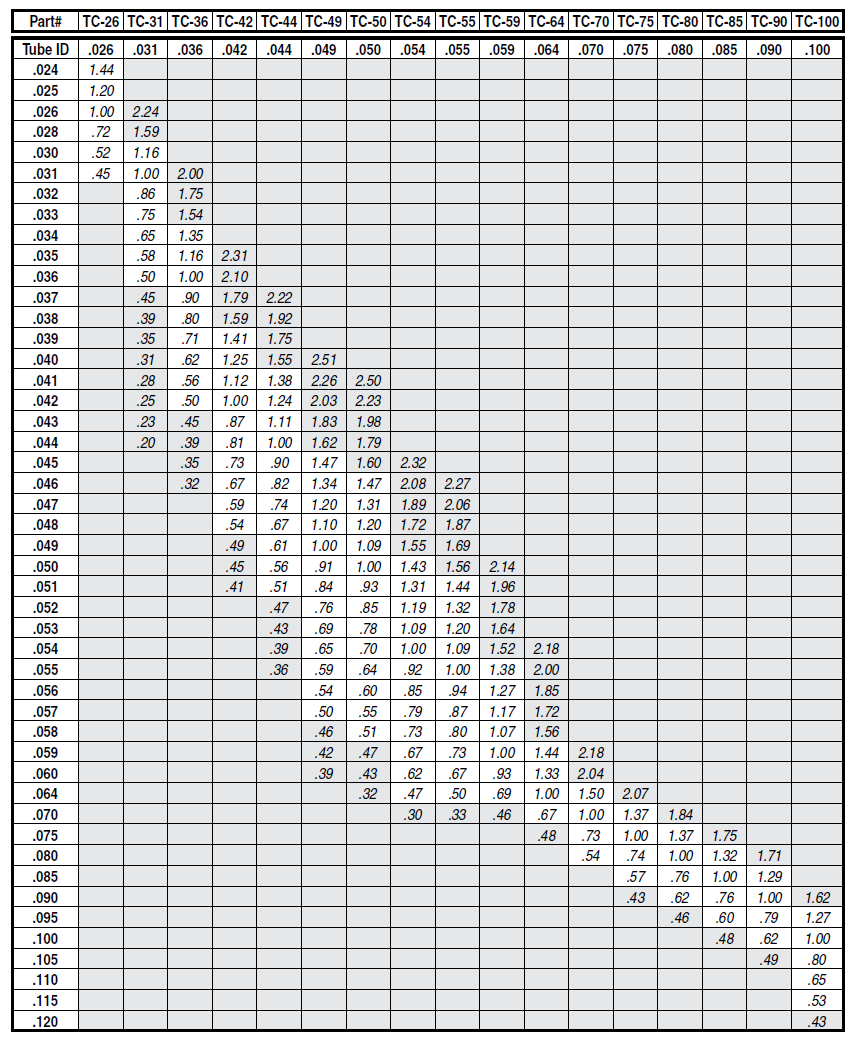 4. Multiply the given length of the recommended cap tube by the conversion factor.

5. The resultant length (Min. 5'/ Max.16') of copper cap tube will give the same flow characteristics as the original recommended cap tube.

The Capillary Tube Length Conversion Chart was developed to enable users of capillary tubing to use the standard tubing sizes which are available through Refrigeration Jobbers everywhere.
While many original equipment manufacturers and condensing unit manufacturers recommend specific lengths and diameters of capillary tubing for their units, these tube sizes are not always readily available except of special order.
This conversion chart enables the user to translate the recommended length into that of a tube diameter that can be quickly obtained.  In using the chart, it is recommended that conversions be made using factors within the unshaded area.  In addition, it is highly recommended that the minimum length of capillary used be 5 feet.

R-134a – It is suggested to add 10% to length.
Recommended capillary tube lengths for each circuit in an air conditioner evaporator where R-22 is the refrigerant. All recommendations must be considered approximate and variations may arise in actual field applications.
Window air conditioners normally have 1 circuit and the recommended cap tube can be read directly from the chart. Larger units have 2 or more circuits in the evaporator. Where this is the case, simply divide the total BTU rating of the unit by the number of cap tube circuits to obtain the BTU/CIRCUIT rating of each individual cap tube.
Example:
Air conditioner is rated at 27,000 BTU and has 3 cap tubes connected to the evaporator. Divide 27,000 by 3 = 9,000 BTU/Circuit. From the chart, this would call for .075 I.D. (TC-75) 72 inch long.The length and I.D. of any cap tube may be adjusted to a more readily
available size by using the conversion chart. 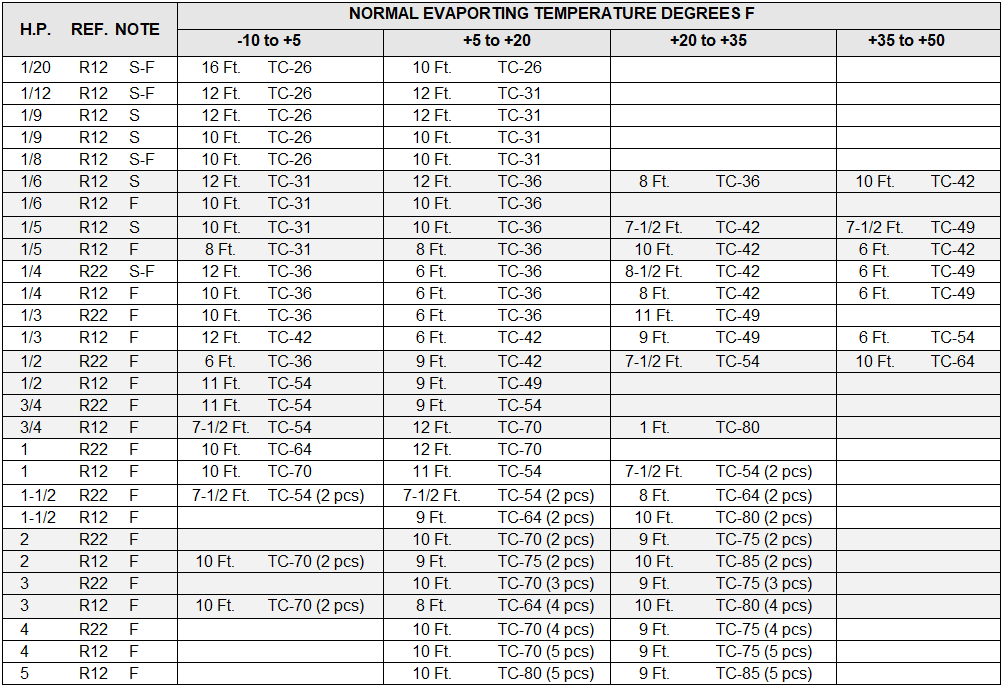